The Unicorn That Bothered Me Most of All 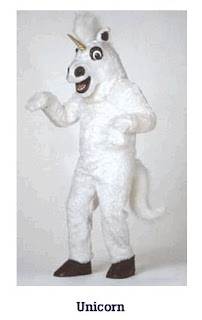 People really think I like unicorns. Sometimes I do my job too well! My birthday yesterday brought a large number of unicorn-related items (which, I must admit, were awesome) from people such as Joey, and the girl who eats dry oatmeal, and Rhea (the one I blame for the reemergence of unicorns on this "blog"), the latter of whom was not here in person, but sent me a birthday "link" to a "blog" called "Unicorns and Robots" (or maybe "Robots and Unicorns") which is pictures of robots and unicorns accompanied sometimes by language of a highly saucy variety, so you should be warned. Here is a unicorn from said site, and for whatever reason, it is the unicorn that bothered me most of all.
Posted by Jack Pendarvis at 12:56 PM