The Movie Reviewer Who Loves Eton, and Other Tales of Hollywood 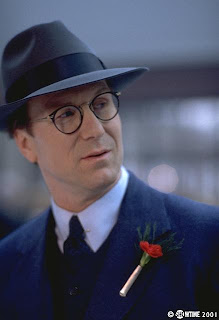 Did you know that according to the "internet," William Hurt has a subscription to THE BELIEVER magazine? Did you also know that I have a monthly column in THE BELIEVER magazine? I have been thinking about William Hurt a lot lately. Like, yesterday I caught the tail end of an interview with him on NPR. He was saying that his stepfather was the son of Henry Luce! And I was like, "!". So then in the New York Times this morning I read a movie review in which the reviewer claims that Mr. Hurt is too aristocratic to play a guy from Kentucky (I'm paraphrasing slightly) which also made me say "!". Because isn't that what actors do? Play guys from Kentucky? Or wherever? Also, isn't there a needless insult aimed at Kentucky somewhere in the reviewer's presumption? The reviewer goes on to complain that another guy in the movie is British, and went to Eton ("!"), and "is as far away from the geeky Southern loner he portrays... as Mr. Hurt is from an oil rigger." I think I did a double "!!" when I read that sentence, because I find it hard to believe that there were no "geeky loners" at Eton. And maybe "complain" is the wrong word, because I think the reviewer was trying to champion the British guy. I think the reviewer's unspoken plea was, "Please put this upstanding British lad in the kind of movie I enjoy, one that is about a countess!" Once again, I am not a movie reviewer or anything, and I haven't even seen the movie, but isn't that what actors do? Play all kinds of people, even if the actor in question went to Eton? But the most important thing is that William Hurt has possibly read my column. So what if I meet him one day and he is like, "Hey, I read your column"? And I would be like, "Thanks." And then he goes, "But what about on your 'blog,' where your friend Dr. 'M.' said she didn't like the 'perpetual crook' in my neck? I don't have a perpetual crook in my neck!" Gosh, it's going to put me in an awful position, and I will have to choose between my loyalty to Dr. "M." and hanging out with my new best friend William Hurt. I wonder what will happen!
Posted by Jack Pendarvis at 12:17 PM