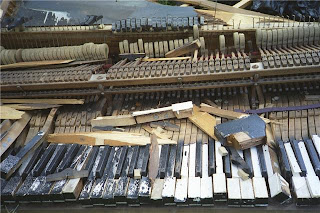 First let me hypothesize that there is a typo in the Rappin' Duke lyrics "linked" to in my most recent "post." The lyrics as printed would have you believe that John Wayne is boasting of being "laid back like a dead fly." I believe he is saying, rather, "medfly." The medflies were all over California at the time of the recording or thereabouts, I do believe, and were the basis for many a humorous topical reference in the representative popular culture of the day. On the other hand, it could be argued that medflies were not "laid back" in any sense. I seem to recollect that they were a plague upon the land. A dead fly, it must be admitted, would be more laid back than a medfly. But it is hard for me to imagine John Wayne boasting about being similar in any fashion to a dead fly! I had another important thought about the Rappin' Duke but it has temporarily escaped my mind. Don't worry! It will come back to me. Also, I will try to synthesize the Wah ha/Duh ha problem, as it has become known among sociologists and linguists who track the "blog." Oh yeah! I remembered the other thing: isn't it interesting that in the 1980s a novelty record could - as "The Rappin' Duke" does - blithely contain a reference to Gilbert & Sullivan, in the form of a quotation from Ko-Ko's lament "On a tree by a river a little tom-tit"?
Posted by Jack Pendarvis at 12:02 PM