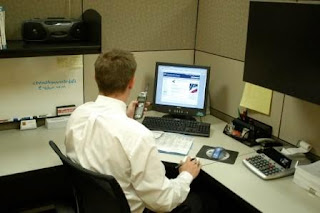 I favor the dull, dry author bio. As an example, see my one-sentence number over on THE BELIEVER "web" site. (I just realized: it's sort of a lie!) The other kind is the "interesting" author bio, as parodied in my first book like so: "Skip Shell is a painter, cook and raconteur. When not traveling the world in his nicely painted convertible, Skip amuses himself by pulling the wings off flies." So I have heard more about the auction: the drawings by Barry Hannah and Tina Fey fetched prices somewhere in the $400-$500 range, whereas mine netted like $175. Not too shabby, but appropriately measly in comparison. I also hear that some people behind the scenes at the auction thought my bio (a bio accompanied each drawing) was too boring and goosed it up at the last minute for extra spiciness. For example, they apparently mentioned my affection for Messiaen and stray cats. Fair enough! I am not hiding my love for Messiaen or stray cats! And it is very flattering that they felt the desire to help, took the time to rewrite my bio, and described me in such glowing terms. But people generally assume that so-called "authors" write their own "bios," so I don't want anyone who was at the auction to think I was bragging about a predilection for Messiaen and stray cats! The "blog" is the place where I do that. To put such things in your own author bio is the equivalent of the dubious author photo, you know the one, the one in which you're wearing a hat AND chewing the stem of your eyeglasses! It reminds of the "Jack Pendarvis is Awesome" (!) page on facebook, with which I am entirely unaffiliated (though people seem to think I created it), and the title of which I find embarrassing due to my unworthiness, yet who would be so churlish as to complain about such kindness? Once again, I am appreciative to the people who goosed up my bio for the auction. They did a great job and made me sound like a real hero. But if people think I wrote it myself it will come off like I'm some sort of fake big shot trying to shoulder my way undeservedly into the company of Barry Hannah and Tina Fey, whose bios were no doubt modest and clean. (I realize that the dry author bio is its own kind of affectation, perhaps a subtler form of bragging. No matter how you figure it, I'm the worst person ever!)
Posted by Jack Pendarvis at 5:05 PM