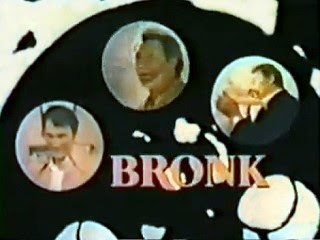 Welcome once again to "All-Star Entertainment Wrap-Up," your one place on the "internet" for all the latest excitement and happenings of the stars! ITEM! Jack Palance fever sweeps the nation! Yesterday's "blog" "post" about Jack Palance sent a stunned nation scurrying to its keypads. ITEM! Remember the man called Sepsey, who once met Ruth Buzzi at a bookstore? Jack Palance once came into that same bookstore! Reports Sepsey: "When this guy asked Jack Palance for his autograph, Jack Palance [refused, replying], 'I’m not an actor anymore.' ... Yet not two months later, here’s Jack Palance in a mattress commercial. Acting!" ITEM! McNeil has been on the youtube, reliving fond memories of Jack Palance. He sends along a nine-minute clip I defy you to watch! It's from the Johnny Carson show. Jack Palance complains that Steve Allen used to pay him in small television sets instead of money. He explains into which part of a pipe the tobacco is supposed to go. He grudgingly gives faint praise to his television series BRONK, which he is there to promote, though he won't admit it somehow. He talks about a TV show he watched that morning (Barbara Walters interviewing Tennessee Williams!). He tells the same story about where he got his pipe TWICE! The kinds of things that would have been on Jack Palance's "blog." There, now you don't have to watch it. That's it for today from all your friends at "All-Star Entertainment Wrap-Up." Until next time, keep "reaching" for the "stars"!
Posted by Jack Pendarvis at 6:42 AM