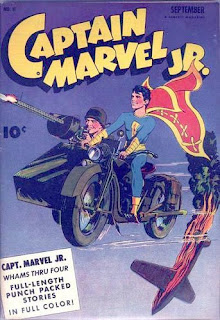 I was at Off Square Books. That's where the used books are! And I came across a secondhand copy of Elaine Dundy's book about Elvis Presley and his mother. Yes, in case you didn't know, witty, worldly, sophisticated Elaine Dundy - novelist of comedies of manners set on the Left Bank of Paris and in swinging London, whose work has probably been described by some critic as "a soufflé laced with arsenic" or "a champagne cocktail with a razor blade in it" or, I don't know, some other thing a critic might say involving light food and a weapon - also wrote a book about Elvis Presley and his mother. And I was standing there thinking, you know, gosh, do I really need this? So I opened it up and it begins, BEGINS I said, with a detailed description of the origin of Captain Marvel's sidekick Captain Marvel, Jr. So at one point Captain Marvel has flown with severely injured Freddy Freeman (soon to be - SPOILER ALERT! - Captain Marvel, Jr.) to a hospital, but is denied entry by what Dundy calls "an officious hospital attendant." Dundy continues: "Responding with a simple 'Nuts,' Captain Marvel walks through a wall and into an operating room where he curtly orders a surprised doctor to 'get to work' on the young boy." So my question was answered. Yes, I really need this.
Posted by Jack Pendarvis at 11:17 AM