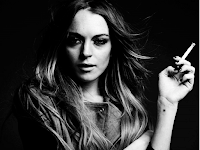 Okay, now Kent Osborne AND Phil Oppenheim AND Scott Phillips have each independently contacted me about the fact that Jerry Lewis said he wanted to smack Lindsay Lohan in the mouth. So I guess it will seem weird if I avoid the topic, although I LOVE avoiding unpleasant things. It is the thing I love above all others! My favorite hobby is avoiding unpleasant things! But that was not nice what Jerry said! Ungentlemanly to say the least! It could be described in many harsher terms! And I do not agree with the violent sentiment he expressed! But what is really weird to me is that a reporter asked Jerry Lewis what should be done about Lindsay Lohan. Like, "Hmm, this Lindsay Lohan situation is getting out of control. I wonder what should be done. There's only one way to find out: Get me Jerry Lewis!" And then Jerry wakes up from his nap and says a bad thing and somebody yells "STOP THE PRESSES! We have to get this in the NEWSPAPER RIGHT NOW!" I suppose I should go on record as saying that no one should get smacked in the mouth. But don't worry, I don't think he's going to go through with it! Because everybody is like, "We have to get her to a safe place!" This from concerned entertainment reporters who have always so tenderly guarded her welfare. In conclusion, this very "blog" has pointed out the very similar celebrity troubles that young Jerry shared with young Lindsay - and really there were others, too, terrible shared troubles that went unmentioned here! So Jerry should exhibit empathy toward Ms. Lohan, I think, and certainly not cruelty. But Jerry said a bad thing instead and everybody fell to the ground bleeding from the ears thanks to the fury of its awful power.
Posted by Jack Pendarvis at 2:35 PM