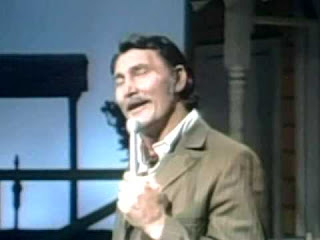 Recently I was up before dawn watching Porter Wagoner again. He was wearing a red shirt and a green jacket with sparkling yellow ears of corn represented. And for some reason he was holding up a big, scary picture of Jack Palance, which surprised me. Turned out Jack Palance was there to sing some songs! And the big, scary picture was Jack Palance's album cover! So Jack Palance sang "Green, Green Grass of Home." Here is a picture of him singing on the very show. My one regret is that his microphone hand is blocking a proper view of his ascot. His singing voice was not the most accurate in regard to pitch. Sometimes he half-talked it. He was dramatic to make up for his problem staying in tune. For example, "Down the road I look and here comes Mary/ Hair of GOLD! and lips like CHERRIES!/ It's GOOD! to touch the green, green grass of home." Mr. Palance came back out later and sang a song about beating a man to death with a chain! For real! His rhythm slipped and he got a fraction behind the beat but the band just kept plugging along, trying to help him out. He and Porter exchanged the most halfhearted pleasantries I have ever witnessed. Porter had to remind Jack Palance to hold the microphone to his mouth when he talked. On this episode, Porter Wagoner's band wore solid pink suits with white shoes and sparkling purple ties. A featured banjo player had a sparkling golden banjo strap. He did a neat trick in which he would bend the notes his banjo was playing by adjusting the tuning keys while continuing to pick with admirable rapidity. Dolly Parton sang a song. She was great. Her guitar strap appeared to be fashioned of gold lamé. The capsule description of the episode indicated that it was from 1970.
Posted by Jack Pendarvis at 6:48 AM