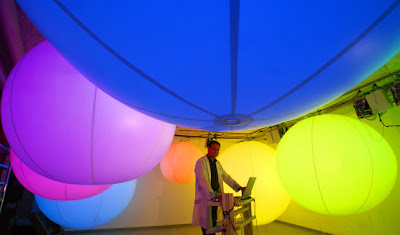 Speaking of the end of the world, I know I have mentioned some of these details about Scriabin before, but they are nicely put - with some extra details! - in a footnote I just read in FORCES IN MOTION: THE MUSIC AND THOUGHTS OF ANTHONY BRAXTON by Graham Lock: "The Russian composer Alexander Scriabin (1872-1915) had chromesthetic perception, that is he literally 'saw' colours in relation to sounds... For PROMETHEUS: THE POEM OF FIRE he had a colleague build a 'keyboard of light' which played the colours of the music... his meta-composition, MYSTERIUM... would incorporate all the arts, re-create the history of the universe from a mystical perspective, and take the form of a seven-day festival in the Himalayas to climax in the actual destruction of our physical plane of existence, as his music dissolved the world in an abyss of flame." So... wow. Some show! Now, honestly, isn't that enough with the destruction of the physical universe and the abyss and so on? Can't we think some good thoughts? Who's got one? Send your good thought to "Good Thoughts" c/o "Writer" Oxford, MS 38655.
Posted by Jack Pendarvis at 7:15 AM