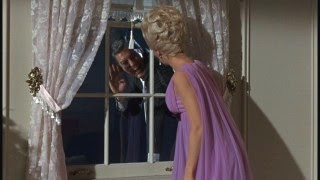 If I had to venture a guess about what your two favorite things are, I would say 1) hearing about my trouble sleeping and 2) finding out what I watch on TV when I have trouble sleeping. Okay, you twisted my arm! I am ashamed to say I had forgotten about Jerry's annual telethon, but there it was in the wee hours waiting for me. I happened to tune in as Dean Martin's daughter was singing her father's hit "Everybody Loves Somebody Sometime" while giant pictures of him dissolved on a video screen behind her. I found it eerie. But I waited for the end of the number, because I wanted to see Jerry come out and give her a hug or something. Almost like Dean and Jerry together again! But it didn't happen. Jerry's buddy Richard Belzer came out instead. I was happy to see that Belzer was wearing a tux with the bow tie all undone - something very "telethon" about that look. So I switched over to the middle of a Dick Van Dyke movie called NEVER A DULL MOMENT. That is the sort of title that critics love! They can say smart things like "I beg to differ." Oh, critics! I hate you so much. Van Dyke was playing a sort of Jerry Lewis role - a goofy actor who is mistaken for a tough gangster and has to play along... or else! Is it a good movie? Well, I don't know. It didn't seem too good. I don't know! But it chugged along with admirable competence. And this one actor, Joanna Moore, she had a nice scene. She was very lively and put a lot of cheerful work into her small, thankless role, really elevated the lines and executed her task with panache. And I was like, "That's the way to do it, Joanna Moore! You have given me a valuable lesson about doing stuff. I salute you, Joanna Moore! I will look up your name on imdb tomorrow to make sure you get some credit for all the work you have done." Only of course I was thinking stuff like, "You are an inspiration, _______!" Because I didn't know her name at the time. Which is telling! But as you can see, I was as good as my word. It is also telling that my vigorous "Google Image Search" for Joanna Moore in NEVER A DULL MOMENT turned up just one still, and that with the back of her head (pictured). Thankless, as I said! Hollywood is some kind of thankless place for women, isn't it?
Posted by Jack Pendarvis at 8:53 AM