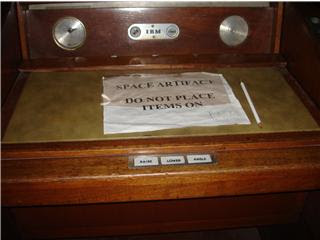 There, you've had some time to consider the "Dudie" reference. Get it? Terrific! Let's move on. The time has come at last for the fifth installment of Mr. Ward's a-"Ward" winning feature, "Mr. Ward's Presidential Korner." As I have hinted previously, Mr. Ward works in television. Right now he's in Houston, doing a shoot at the Johnson Space Center. In an email entitled "Ask Not If You Can Place an Item on the Podium," Mr. Ward sends the "blog" this message: "They've got the very podium that Kennedy used to make his famous 'let's go to the moon' speech. I got to stand behind it. I attached a picture so you can get a Kennedy eye-view of the podium. Note the space age 'raise,' 'lower,' and 'angle' buttons. You can also see by the wrinkled paper halfway covered in plastic that the folks at the space center place a high premium on podium preservation."
Posted by Jack Pendarvis at 6:50 AM