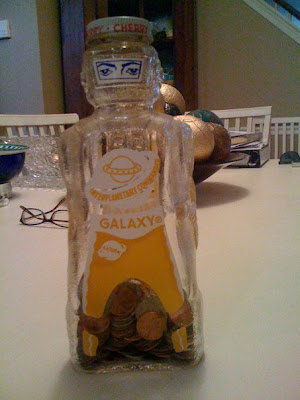 Once again I violate my own rule and add a new photo to the memory banks of my dangerously overstuffed computing machine. I hereby give you Laura Lippman's "heavy glass robot." But as you can see, he is not a robot at all! He is clearly some sort of space commander. Another correction: the same "heavy glass robot" "post" was poorly worded on my part, and I made it sound as if I would have poured the robot (sic) down the sink. Clearly, I meant the cough syrup. But ha ha! The confusion reminds me of an old James Thurber joke. See, a guy has a large, lurid bump on his head and his friend asks why. "My wife threw tomatoes at me," comes the reply. The friend is astounded and bemused! How could tomatoes cause such an injury? The first man says, "They were still in the can." Thurber told it better. The "blog" regrets the errors.
Posted by Jack Pendarvis at 6:22 AM