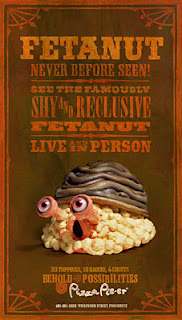 As I have mentioned before, mascot news is one legitimate excuse for the "blog" to overturn temporarily its ban on new images. Hence the fetanut seen here, more of which later. Although the trend toward unicorn paraphernalia remains strong, there has been a noticeable uptick in mascot ephemera as the gift of choice to yours truly. I am happy to say that I received the promised sticker representing the Fighting Okra of Delta State to put on my accordion case. I also received a nice postcard from "Bloggy" the "Blog" Mascot, showing a big green mascot head (not "Bloggy's;" she has a regular head) with arms and legs sticking out of it. The head seems to be terrorizing people on a city street. The fine print on the back of the postcard refers to "Big Nazo," which I assumed was the name of the ambulatory head, until I found the Big Nazo "web" site, where Big Nazo is revealed to be (in their words) "an international performance group of visual artists, puppet performers, and masked musicians who unite to create bizarre and hilarious larger-than-life sized characters, environments, and spectacles." They also advertise pizza, it seems. Here is a character, the fetanut, I found on the site (I couldn't find the image "Bloggy" sent me), and I don't know, the poor, beleaguered fetanut doesn't make me want to eat pizza. It wears the expression of a lost soul from Dante. Is it supposed to be made of feta cheese? I am not sure "feta" is a great word to use in a compound character name, especially when you are trying to sell pizza and your character is a misshapen, clearly forlorn glop, because it looks so much like "fetal." "Click" here to see the "Church Group Super-Hero Project" created by Big Nazo as "commissioned work." I want to know more about what's going on there!
Posted by Jack Pendarvis at 8:09 AM