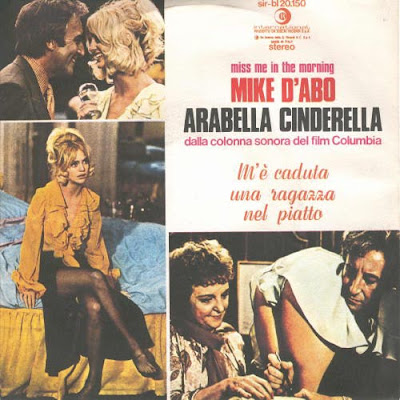 Speaking of interesting old 45s, here I am violating my own rule again by adding a new image to my already dangerously overloaded computer. But it had to be done! As promised, I watched THERE'S A GIRL IN MY SOUP all the way through to its closing credits, so I could find out for McNeil who sang "Arabella Cinderella." Here is the single, and as you can see, the performer is Mike d'Abo. I found the picture on Mr. d'Abo's "web" site, which he still maintains (I think; his last message appears to be from 2007, though the site itself was updated just a few weeks ago). The main page shows Mr. d'Abo with his family, and they look very happy and nice, and I admit that I somewhat regret my easy dismissal of "Arabella Cinderella," of which, after all, only snippets are heard in the film. And what kind of man judges a snippet? A hasty man, that's what kind. Please note that the 45 cover includes a shot of Goldie Hawn flung over Peter Sellers's shoulder, and I must admit that her underpants are showing, which is out of keeping with the "blog's" usual policy vis-à-vis raciness. But the "blog's" editorial board decided that the unexpected discovery of the "Arabella Cinderella" 45 was of sufficient interest to allow for an exception. (By the way, having at last seen the film all the way through, I must admit that it does not adhere to the socio-comedic tradition of a ritualistic affirmation of bourgeois norms, as McNeil and I originally speculated. In fact - SPOILER ALERT! - Ms. Hawn traipses off into a seemingly abusive relationship and the abandoned Mr. Sellers reverts to shallow hedonism, and the whole thing turns out pretty bleak if you ask me, so who's bourgeois now? Well, the movie still is, somehow. As Henri Lefebvre observes in his CRITIQUE OF EVERYDAY LIFE, "Protesting against bourgeois stupidity and oppression, the anarchic individualist is enclosed in 'private' consciousness, itself a product of the bourgeois era, and no longer understands human power and the community upon which that power is founded. The historical forms of this community, from the village to the nation, escape him… By following alienation to its very extremes he is merely playing into the hands of the bourgeoisie.") A final curiosity: Ms. Hawn's underpants are a bright, shiny green in the actual film. The 45 jacket has faded, perhaps, or there was a mistake by the printer, or perhaps the color was purposefully altered. Another mystery!
Posted by Jack Pendarvis at 8:40 AM