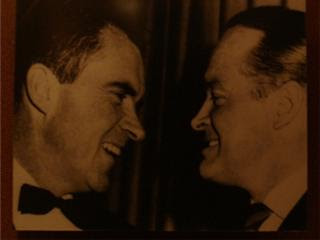 Over on her "blog," Laura Lippman is "blogging" about her penchant for collecting coin banks. Recently she picked up "a heavy glass robot that once was a container for children's cough syrup." And I was like, "Heavy Glass Robot would be a great name for a band!" Because I am one of those people I hate, one of those people who always says "that would be a great name for a band" no matter what anyone says. I believe there are other people who do this, but most of them stopped about midway through college in the 1980s. Apparently I never will. What else was I like? I was like, "Man, if I had had some children's cough syrup in a robot bottle I would have taken it all at one time so I could play with the robot! Or poured it down the sink at least." Which is why I am sure they no longer put children's cough syrup in a heavy glass robot. The end. For further reading: the time Laura Lippman and I talked about about mimes and robots.
Posted by Jack Pendarvis at 6:02 AM