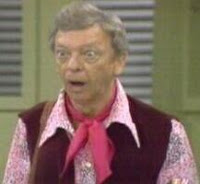 I can't believe myself. Here I am with two more "Literary Matters." I didn't even realize they were literary matters until I finished typing them up. But I can't lie to myself. I apologize for inflicting more literary matters on you so soon. I'm a monster! 1) I have been looking through A NEW LITERARY HISTORY OF AMERICA, co-edited by Greil Marcus, who may disapprove of me. My favorite part so far, by leaps and bounds, is the article on Hank Williams (he's from Alabama!), and it appears that Maud Newton feels the same way. She includes a lengthy excerpt on her "blog." And as a bonus, it turns out that she loves Roger Miller, one of my favorite singer-songwriters. (Please recall our shared affection for Peter De Vries and Charles Willeford.) My favorite part of the excerpt (and the original article) is Harlan Howard's analysis of the first verse of "Cold, Cold Heart," which is "invisibly held together by fifteen internal r phonemes." Observes Mr. Howard, "Once these words are put together this way, they don’t come apart.” A nice goal for a writer in there. 2) Speaking of which, I am reading REPETITION by Kierkegaard, and the plot is a lot like a THREE'S COMPANY episode, no kidding. This guy wants to break up with his girlfriend, but he wants it to be HER idea, so the narrator (Kierkegaard's stand-in) hires a seamstress to PRETEND (for a year!) to be the guy's other, secret girlfriend to make the real girlfriend jealous. Hilarity ensues when Kierkegaard's friend chickens out. Or philosophy ensues, I guess. At one point, the Kierkegaardian narrator explains why he is keeping his descriptions short, why he is not bringing in "a mass of unrelated things, parlours and dress and beautiful scenery, relatives and friends." He says, "I like lettuce, but I eat only the heart; the leaves, it seems to me, are for pigs." So think about that, too. (This "post" cries out for a brand new illustration - or two! - of Don Knotts as Mr. Furley. I don't know how much longer I can keep up my big artsy "random picture" idea.)
Posted by Jack Pendarvis at 7:30 AM