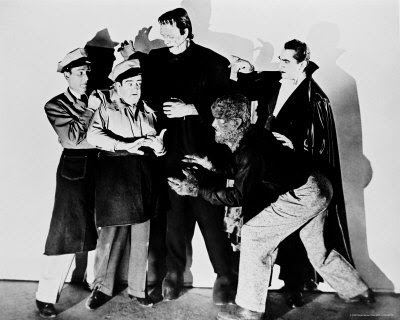 Barry B. thinks I should revel in the Abbott and Costello comparison and take it all the way to its logical conclusion. "In your next book," he writes, "you can have a character run into Frankenstein, Dracula and the Wolfman! All in one action packed book!" A great idea, and one that calls for the rare inclusion of a photo that actually has something to do with the "post." Speaking of new images and Halloweenish stuff, Phil sent me this comic book cover (below) showing Bizarro Supermen dressed up like President Kennedy and Marilyn Monroe (!!!) and Jerry Lewis for Halloween. If you don't know what a Bizarro Superman is, I don't have time to tell you. The Bizarro Jerry Superman thinks he is playing a trick on Krypto the Superdog by turning delicious "cold dogs" into terrible "hot dogs" - but the joke is on him, because everybody loves hot dogs! 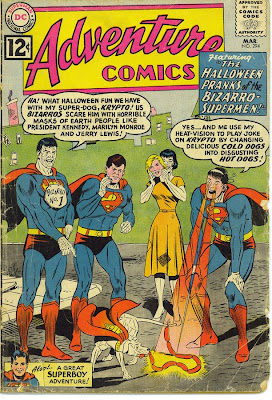 Posted by Jack Pendarvis at 6:41 AM