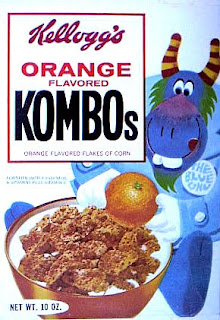 Whenever I talk about the "blog" of Andy Hopkins, I seem to emphasize the mom-and-pop grocery store angle and not the way he digs up old homemade novelty 45s and lets you listen to them RIGHT THERE ON HIS "BLOG." Recently, for example, he put up one called "Truck Drivers Don't Eat Duck." I don't want to give away too much of the story (SPOILER ALERT!) but this truck driver stops at a roadside cafe, where the waitress offers him "duck under glass" (!), prompting his memorable response. As always, the best part is Andy's thorough analysis. "The key changes are idiosyncratic, but the lead guitarist makes taste, not waste, when finessing the leaps," he notes. At the end of the song (MORE SPOILERS!) the truck driver vows to order chicken cordon bleu next time and fling it in the face of his hardworking server, which seems excessive to say the least. Surely the waitress did not choose the daily special. She is just trying to make an honest buck like anybody else. The source of the truck driver's rage is hard to pinpoint, and the object of it curious indeed! As Karl Marx observed, "This antagonism [of worker vs. worker] is artificially kept alive and intensified by the press, the pulpit, the comic papers, in short, by all the means at the disposal of the ruling classes." It is something to think about with Labor Day coming up.
Posted by Jack Pendarvis at 7:45 AM