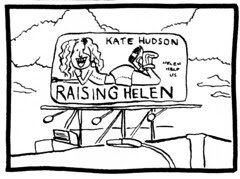 As I believe I have mentioned before, people in California are nice. Take the staff of Skylight Books, for example. When I did my reading there, I noticed a large, attractive, oddly shaped book that I wanted a lot, but which would have been impossible to carry on the airplane back to Atlanta. They said they could ship it for me. With characteristic selfishness, I did not think how tough it would be for them to ship the large, attractive, oddly shaped book. But they did so cheerfully. Not only that, but they got the wonderful narrative cartoonist Joe Matt to come into the store just to sign a copy of his new book for me. These are nice, hardworking people, I tell you. They write, too! Kerrie Kvashay-Boyle, who was kind enough to be my MC on the night of my reading, has been anthologized, for example, and there is some of her work on its way to me in the same package with the big, good book and Joe Matt. I was first introduced to the work of Mr. Matt by Kent Osborne - that's just a fascinating side note for you people of the world! Anyway, Kent happens to be something of a cartoonist himself. Hey, he has a new book of comics out, which he is publishing himself. You can buy it for $5 here. Okay! Kent lives in California, too, and he is nice as well. (Pictured, a California-esque scene from Kent's comic book.)
Posted by Jack Pendarvis at 2:14 PM