The Last 30 Minutes of Billy Madison 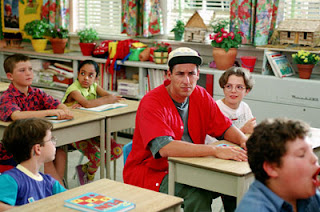 I have just viewed the last thirty minutes of BILLY MADISON with a general sensation of enjoyment. How is it that I have never seen BILLY MADISON? Perhaps I considered myself too fancy. Perhaps my attitude was similar to that of some persons who do not enjoy (those of you who have even a casual acquaintanceship with the "blog" will know what is coming next) Jerry Lewis. Based on the last thirty minutes of BILLY MADISON (which are all I have seen of it) Mr. Adam Sandler, the star of the movie, is influenced mightily by Lewis. A couple of sight gags in particular (a man catches fire while baking a pie - he's perfectly fine in the next scene; a station wagon slips on a banana peel) show very clearly the direct line from Tashlin to Lewis to Sandler. Most of all, of course, the similarity lies in the prototypical "character" of both performers: an inanely bellowing man-child. The audacious, even bizarre assumption of a Lewis film - identical with that of the last thirty minutes of BILLY MADISON - is that we will ROOT FOR the inanely bellowing man-child. And we do! We do! By all that's holy, we do. P.S. Don't forget to watch THE WIRE tonight!
Posted by Jack Pendarvis at 9:08 AM