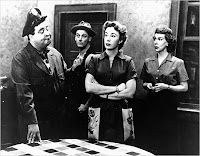 Spurred on by the competition from Dan, McNeil has dug up two new, juicy tidbits for this edition of his popular UFO column. First, would you like to hear a "real-life" UFO story starring Jackie Gleason and Richard Nixon? I don't see why not! Then "click" here. "Gleason's ex-wife even wrote about it in her memoirs," McNeil reports. Second, McNeil has reminded me of a HUGE news story from our youth in Alabama. Living as we did on the border of Mississippi, we were treated to a number of local reports about these guys ("click" here) who said they had been abducted by aliens. Nor was it just a regional item. I remember seeing them interviewed on the Dick Cavett show at the time. I seem to recall Mr. Cavett's attitude as being "cute." He was "cute" a lot, I seem to recall, not just with UFOs. Hey, speaking of cute, I should have called this one "McNeil's 'And Away We Go!'" Because that's something Jackie Gleason used to say. And if I really thought about it, I could come up with a "To the moon!" joke. Never mind.
Posted by Jack Pendarvis at 2:46 PM