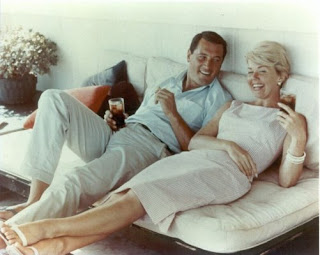 Hey, remember when I read three novels in a row that mentioned Pernod? Of course you do! You probably wrote about it in your diary that night! What about the time I read two books in a row that mentioned Virginia Hill? That was so unbearably fascinating for you, I know. And how about the time two very different books, which had little to do with Schoenberg, were both illustrated with oil paintings of that composer? You probably fainted! Well, get ready. Because now I'm going to tell you that after THE EXECUTIONER'S SONG by Norman Mailer, I am reading a book (PICTURES AT A REVOLUTION) that mentions both Norman Mailer AND Bob Hope (who was mentioned in THE EXECUTIONER'S SONG). I know! This is a great argument for meaning in the universe. Get to work on it. I must say, the reference to Bob's "tinny jokes" is a tad unflattering in PICTURES, whereas Mailer used old Bob to represent the pinnacle of comedy ("allergic to horse****" is how he put it, I think). Speaking of unflattering things, I'm not very far in, but PICTURES has already used Doris Day three or four times as some sort of representative of lameness, which I find slightly bewildering. Those motion pictures of hers reward serious cultural contemplation, and can make you laugh when you're feeling low. But I'm not putting down the book, in any sense of that phrase. It continues to compel. I'm just saying we have different takes on Bob and Doris, that's all. But polite disagreement is acceptable in our complicated society! (See the fourth "blog"mandment.)
Posted by Jack Pendarvis at 10:51 AM