The Time Has Come to Speak of Pastor Melissa Scott 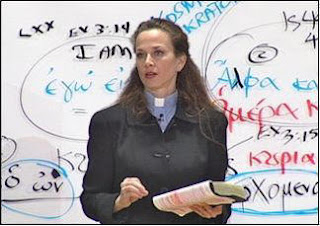 Yesterday afternoon, a friend came over to the house. We discovered during the course of casual conversation that we share the habit of stopping on the religious channels to see what's up in the world of televised religion. Yes, at last I had found a fellow devotee of Pastor Melissa Scott. When I brought her up, my friend said, "You mean the woman who strides around in front of a twenty-yard dry erase board?" He stood up and demonstrated the way in which Pastor Melissa Scott strides around in front of her magnificent white dry erase board. In the process, he scared one of our cats. But I had been put into a forgiving mood by his apparent knowledge of Pastor Melissa Scott. Let me pause to make it clear THAT I DO NOT ENDORSE, NOR HAVE I MADE THE TINIEST EFFORT TO UNDERSTAND, THE THEOLOGY OR POLITICS (IF SHE HAS ANY OF THE LATTER) OF PASTOR MELISSA SCOTT, NOR DOES THIS "LINK" TO HER "WEB" SITE INDICATE ANY ENDORSEMENT OR UNDERSTANDING. I am interested ONLY in the SPECTACLE of Pastor Melissa Scott. I watch her in the way that Jasper Johns asks us to look at his paintings. She strides around, as has been described. She appears to wear a duster like Henry Fonda's in ONCE UPON A TIME IN THE WEST. She is tall and thin and her hair is very long. She writes in markers of many colors on her big board. Behind the big board is an even bigger American flag, perhaps the largest I have ever seen. Pastor Melissa Scott writes in Aramaic, Greek, and Hebrew on her big board. According to my friend, she speaks 18 languages. I will take his word for it. My friend also described the way in which Pastor Melissa Scott makes a "palimpsest" (his accurate and pleasant word, which I hardly ever hear anyone use in conversation, it seems) as she continually erases and rewrites things in Aramaic, Greek, Hebrew, and, apparently, 15 other languages. She talks and talks but nothing she says seems to sound sensible to me because, perhaps, of my inability to pay attention to anything but the awesome spectacle (in this case I think I am using the word awesome "correctly") of Pastor Melissa Scott. I was glad to tell my friend something about Pastor Melissa Scott that he did not know: the other night I saw her in front of her big board and gigantic American flag singing a gospel-tinged number with what appeared to be her very own rock combo. What CAN'T you do, Pastor Melissa Scott?
Posted by Jack Pendarvis at 11:09 AM