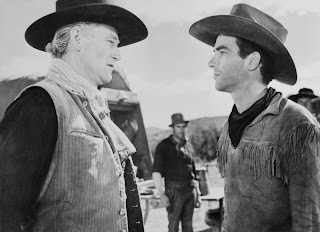 Here is our new feature in which we wrap up everything that is happening in the world of McNeil. It is a spin-off of our popular column idea stolen from the New York Times, "Arts, Briefly." Because it is about McNeil, it is called "McNeil, Briefly." Get it? Okay. First item: McNeil is tired of contributing to his old "blog" column "Way... Way Out." He wants to start a new regular feature in which his father, who has recently retired, reviews all the movies he now has time to see. Recently, McNeil's father watched the Howard Hawks film RED RIVER, starring John Wayne and Montgomery Clift. His review: "I was eight years old when that came out." Second item: McNeil's coworker Secondhand George recommends a book. He hasn't read it yet, but he heard an interesting piece about it on the radio. The book is called CHARLATAN. It sounds fascinating and crazy. Look at this review. We don't know about it firsthand, but Secondhand George (who hasn't read it, remember, so this is really THIRD hand - how dangerous, bold, and exciting!) says check it out. Good night from all of us here at "McNeil, Briefly."
Posted by Jack Pendarvis at 3:55 PM