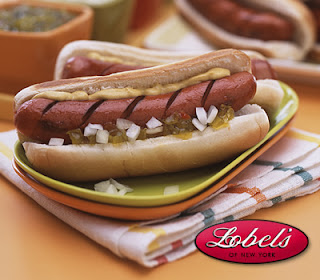 Part of the fun last night was a big table at the Ajax Diner. Sitting across from me: John T. Edge, who revealed that he is now "blogging" for Gourmet magazine. John T. said that his experience had been somewhat like mine: beginning with a certain amount of resentment and whining about being "forced" to "blog," then quickly becoming joyfully addicted. John T. and I are about to go in together on a crate of Lobel's hot dogs, and he has proposed a Lobel's hot dog "blog-off" when that happy event does occur. By the way, I misquoted John T. in an earlier entry. Lobel's DID cut steaks for Jackie O., but they PROBABLY never made hot dogs for her. John T. did not ask me to make this correction, by the way. He was perfectly happy with the idea of Jackie O. buying and consuming hot dogs. But - given his excellent and deserved reputation - I did not wish to have people thinking that John T. was going around blithely giving out false information. That's my department!
Posted by Jack Pendarvis at 7:25 AM