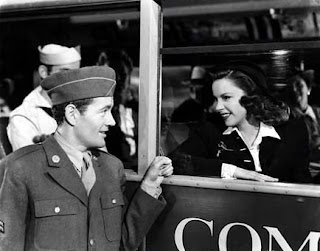 Just watched the Vincent Minnelli movie THE CLOCK on the recommendation of Mark Childress. It has emboldened me to make another unsubstantiated claim about Martin Scorsese, which I might check for veracity through the power of the "internet," but won't due to extreme laziness. Nonetheless, I believe THE CLOCK must have had a lot of influence on Scorsese. Parts put me in mind of NEW YORK, NEW YORK - other parts, a benevolent version of AFTER HOURS. I won't get into that, because I want you to watch THE CLOCK and don't want to spoil it for you by telling too much. I will remark on one particularly striking way in which I believe it inspired Scorsese. Toward the end of THE CLOCK, Robert Walker and Judy Garland are in a diner, eating soup, and at a table behind them there is the nosiest extra you have ever seen in a movie. The scene is pointedly echoed in THE KING OF COMEDY during a dinner date between De Niro and Diahnne Abbott. Watch both movies and you'll know what I'm talking about. Watch them now, I said!
Posted by Jack Pendarvis at 1:17 PM