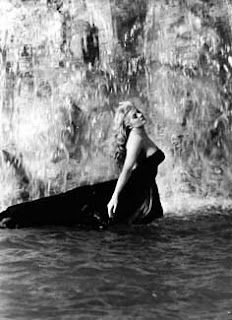 "The Ekberg Objection" was our "post" with the Ludlum-like title - not "The Ekberg Misdirection," as previously reported. I mean, "The Ekberg Misdirection" sounds pretty Ludlummy, but "The Ekberg Objection" came first, so the honors must go to it in all fairness. Incidentally, we were at a dinner party tonight and someone used the phrase (for reasons too complicated to explain at the moment, or ever) "The Lazarus Chicken," which I thought at the time was reminiscent of Ludlum but now I don't know. Is it more like Bradbury? Finally, Phil has changed his mind about the greatest "web" site of all time. It's not the one he said it was before. It is THIS one ("click" here) instead, or so he claims. I think he was right the first time. (Pictured, Ms. Ekberg. Hey, she came up at dinner tonight, too, indirectly! We were talking about her big scene in LA DOLCE VITA, the one in which she traipses around in the fountain with a kitten [not pictured] on her head - but the scene was mentioned in passing, the focus of the comment was the Trevi Fountain itself, and Ms. Ekberg did not really come up, if you want to get technical about it.)
Posted by Jack Pendarvis at 11:06 PM