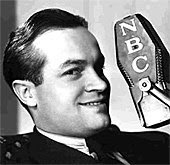 We take time out from our old-timey book reports to pay tribute to something the young people of today enjoy even more, if possible: old-timey radio dramas. The rental car for our recent trip was equipped with Sirius satellite radio. Upon the recommendation of my brother (not to impinge too much upon his privacy, but he is employed by that particular network in an executive capacity), we listened to Channel 118, the "Radio Classics" channel. Based on a few hours of haphazard listening, I am now prepared to list the greatest old-timey radio shows in the order of their greatness: 1) The Bob Hope Show; 2) Dragnet; 3) Fibber McGee and Molly; 4) Suspense. The good ones stood out because of the scripts and the voice talent. I was particularly surprised by the quiet naturalism in both of those categories during the single episode of Dragnet we chanced upon. I'm not saying that the radio version of Dragnet is equivalent to THE WIRE, mind you, but the cops and the crooks DID have human problems and shared concerns. What can I say about the Bob Hope Show? It was snappy, light, and loose - in a word (though this claim will send a shudder deep into the soul of the author of PICTURES AT A REVOLUTION): cool. Cooler even than REGARDING HENRY. (I use that example because the author of REVOLUTION places HENRY director Mike Nichols at the epitome of cool, where he is supposed to shine down as a mighty beacon to the wretched wraith of Hope. Why can't I LET IT GO???) By contrast to the well-oiled Hope Show, Fibber McGee and Molly relied on the creakiest of stage machinery, just like the other old radio sitcoms we heard. (We won't name them because they were working so hard for us!) But the fine, seemingly offhand voice work and committed, almost classical approach to its hoary contrivances helped FM&M tower above the rest. Also, the commercials in FM&M (as I will call it for the rest of my life) were exceedingly sarcastically handled, which made for pleasurable listening and true laughs. The worst radio show ever, sadly, is "The Shadow." It hurts to say it, because you know how much we love the title character here at the "blog." I will say that one episode of "The Shadow" predicts several important plot points of LOST. (Dear Dr. "M.": Remind me to email you and tell you which ones!) This has been the final and most authoritative word on old-timey radio shows forever and ever. I base all this on three episodes of Hope, one of Dragnet, two of FM&M, two of Suspense, and two of The Shadow. We are comfortable in the knowledge that this "post" will be of no use to anyone. Remember what Jasper Johns said!
Posted by Jack Pendarvis at 7:18 PM