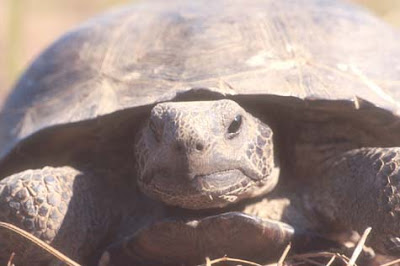 McNeil thinks I have confused everyone by putting up a picture of the CADDYSHACK gopher when a picture of a gopher tortoise would have illustrated my point with more accuracy. He also thinks I "go back and forth too much," putting contradictory pictures into the reader's head. To put it plainly, then: in the Errol Morris movie under discussion, an old man (according to the VHS box and the general attitude of the film) "thinks his pet turtle is a gopher." According to the film and the VHS box, then, the old man is crazy. But the truth is that the man's "turtle" (actually, a tortoise) IS a gopher (as the gopher tortoise is commonly called for short). Therefore, the film and its packaging are making fun of the old man for no reason. The old man does not "think" his pet is a gopher. His pet IS a gopher! Okay! Here is a picture of Gopherus polyphemus to clear everything up. Thanks, McNeil! Now I seem even crazier than before. How's that gopher picture? Big enough for you, McNeil?
Posted by Jack Pendarvis at 10:27 AM