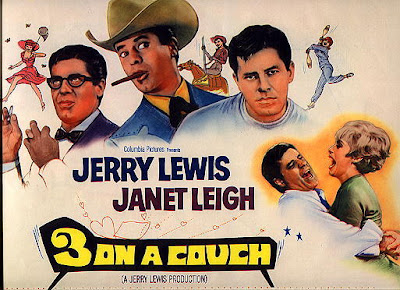 Just LOOK at what McNeil forgot to record on his DVR! It's not the first time such a lapse has occurred. I hate to say it, but those of us who no longer have access to TCM are no worse off than those who do have access yet take it for granted and do not use it wisely. The part that really smarts is this: McNeil found out about his latest blunder - TOO LATE! - from one of his college students. Yes, McNeil has been forcing his students to watch clips of THE BIG MOUTH (see the previous "Korner"). So one guy came into class today and said he had seen "another Jerry Lewis movie." When McNeil asked which one, the kid shrugged and said, "He was on a boat." "A boat? A boat?" McNeil asked, racking his brain and sweating with anxiety. "Maybe it was HOOK, LINE & SINKER," I suggested when McNeil repeated the story to me. "No," said McNeil. "I missed my one chance to record THREE ON A COUCH. They'll never show it again." He was filled with remorse. But at least he's got the kids relating to Jerry! For McNeil, a bittersweet victory. Pyrrhic, even. Well, not Pyrrhic, technically, but you get where I'm coming from with my classical allusions and all.
Posted by Jack Pendarvis at 1:49 PM