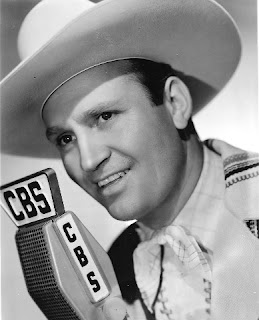 You know of the "blog's" interest in Gene Autry. Or maybe you don't. Well, the "blog" is interested in Gene Autry. And it seems as if an old Gene Autry serial is being released on DVD, which gives me the opportunity to mention something I should have mentioned a long time ago: how much I look forward, each and every Tuesday, to reading Dave Kehr's column on new DVD releases in the New York Times. (Kehr is a Jerry Lewis fan, by the way. I'm keeping track and one day I'll publish a lavish registry of all of us - limited edition, in slipcase.) Today's column is mainly about old Gene. I hope it will not be illegal or impolite to quote an entire paragraph: "It is said that Wallace MacDonald, one of the serial’s five credited writers, came up with the concept while under the influence of nitrous oxide at his dentist’s office. That seems quite possible, given the screenplay’s furious imaginings, which include an interesting kind of television that requires no cameras (but has an inconvenient, floor-level circular screen) and 'radium bombs' posed to destroy the entire planet." (P.S. When you "click" on the Gene Autry "link" at the top of this "post," please "click" on the Tex Ritter "link" you find, though it may seem counterintuitive, to trace the entire history of Gene Autry on the "blog." I thank you in advance for spending your workday in such a fashion.)
Posted by Jack Pendarvis at 7:37 AM