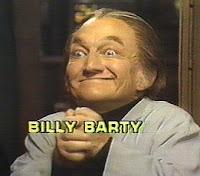 In an email entitled "Rebuttal," Mr. Ward writes: "In response to what was referred to as 'the greatest hour of television ever' on your blog, I think you may have overlooked the one truly greatest hour which aired 6 months earlier, on October 29, 1976. 'The Paul Lynde Halloween Special' remains quite possibly the most 70's-esque piece of entertainment ever produced. Besides Paul Lynde, guest stars included Witchie Poo from HR Pufnstuf, Donny and Marie, Florence Henderson (who sings a disco version of 'That Old Black Magic'), Tim Conway, Billy Barty, Betty White, KISS, and yes, Roz 'Pinkie [sic] Tuscadero' Kelly who, with Paul, performs the song 'Disco Baby.' Top that. Clips - Paul Lynde as the Rhinestone Trucker; lots of CB jokes; Paul interviews KISS with the help of Margaret Hamilton."
Posted by Jack Pendarvis at 9:05 AM