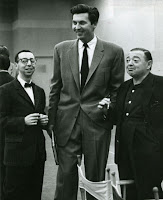 The bird correspondent responds: "Hmm...turkeys. I suppose everyone knows that Ben Franklin suggested the wild turkey would make a better national bird than the bald eagle. The eagle, Ben claimed, possesses 'bad moral Character,' whereas the turkey is, 'though a little vain & silly, a Bird of Courage, and would not hesitate to attack a Grenadier of the British Guards who should presume to invade his Farm Yard with a red Coat on.' But everyone knows that! Supposedly wild turkeys are very shy, but I also have seen them hanging out on the sides of roads, and I had a loud flock of toms living outside my studio when I was up at the MacDowell Colony in NH. There is even an in-town flock here in Atlanta, in a Druid Hills neighborhood where people have been feeding them and watching out for them since the 60s or 70s." (P.S. I realize that this "post" has nothing to do with Arnold Stang, Fess Parker, or Peter Lorre but I can't help myself.)
Posted by Jack Pendarvis at 8:25 AM