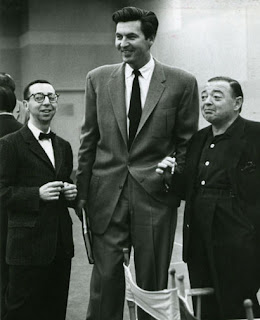 According to one place on the "internet" - so it must be true - Arnold Stang is living in a retirement community in Massachusetts. What this means to McNeil is a documentary in which he and I go on a road trip to meet Arnold Stang. We bandied about several possible titles, many of them bawdy. Later, McNeil called back. "The title should be STANG!, with an exclamation point," he said, "and the theme song is 'Start Me Up' by The Rolling Stones." I asked if we should change the words to "Stang Me Up." McNeil said no: "I already thought of that. I tried singing it out loud in my truck. It didn't sound right." To conclude, McNeil envisioned a scene in which we roam the halls of the retirement community, yelling "You've been Stanged!" for some reason. He's working that part out. (Pictured, Arnold Stang, left, with Fess Parker and Peter Lorre. You knew this day was coming!)
Posted by Jack Pendarvis at 4:35 PM