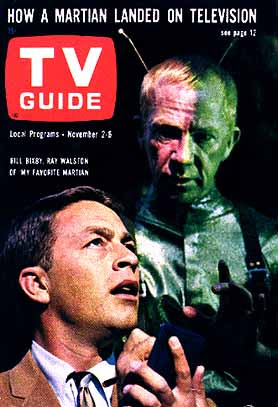 I told you. Dang! The NY Times scoops me again. The writer even mentions Bewitched, My Favorite Martian, and I Dream of Jeannie near the end, as I sort of did. (Also, my reference to camp was intended to bring DARK SHADOWS to mind; she mentions it explicitly. Finally, we both used the term ghost busters, though she made it one word.) I swear I didn't see the article before I wrote the previous "post." Could the coincidence be... supernatural??? You know how the "blog" has eerie powers that no one can understand. In any case, I still want to hear from Dr. "M.," who has surfaced recently only to complain about William Hurt's neck. Television viewers need you more than ever, Dr. "M."! And I didn't entirely buy the NY Times writer's answers, which were nearly as pat as my earlier thoughts on werewolves (no offense! The article was interesting and enjoyable). I brought up this whole supernatural TV problem to Theresa the other night, and though she is getting a Ph.D. in American studies from Emory, she was rather stumped. "It's more than just cashing in on LOST," she said. "But it's hard to say when we're this close to it." Theresa would like to wait a couple of years before jumping to any conclusions. (Her chapter on Patty Hearst, on the other hand, is becoming deeper and richer every day, the story having had time to percolate or brew or steep or something in the cultural imagination.) I feel that I should DOUBLE SWEAR as to the coincidence. I have been thinking of "blogging" something about this, McNeil's daughter's question spurred it, and only then did I see the exact same idea THIS VERY DAY in the Times. Good gravy!
Posted by Jack Pendarvis at 8:39 AM