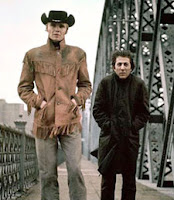 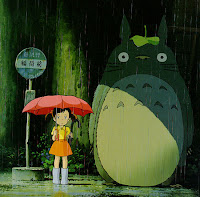 The answers to our recent survey question are flooding in! Reports Karen Spears Zacharias: "THE GREAT GATSBY. I fell in love with both Mia Farrow and Robert Redford, and all things F. Scott Fitzgerald. BTW: I once got to hold his briefcase, briefly." James Whorton, Jr., cites THE CONVERSATION (our third mention of a Coppola movie in just two editions of the "Blog" Movie Club!), but says "it could at any moment be displaced by MY NEIGHBOR TOTORO." Speaking of children's movies, it might come as no surprise that the great food writer - and so much more! - John T. Edge loves WILLY WONKA AND THE CHOCOLATE FACTORY (Gene Wilder version). He says, "I know all the words to the Oompa Loompa songs. And who wouldn't want to eat a candy toadstool and trip?" Speaking of knowing all the words to things, my sister's favorite movie is ON THE TOWN, the Gene Kelly/Frank Sinatra musical. Since about the age of ten (or earlier) my sister has been able - thanks to multiple viewings - to recite ALL the dialogue and sing every song (as I can confirm from repeated experience) and she still loves it just as much today. Speaking of multiple viewings, Kent Osborne has this to say about his own favorite, MIDNIGHT COWBOY: "I remember watching it five times in five days when I first saw it. It's amazing." See how I made each response kind of flow together like that? That took some doing! But the "blog" is always working for you, to make your "blog" reading experience relaxing and enjoyable. Hmm... I see that I already have three new responses waiting. Golly! I need to take a nap.
Posted by Jack Pendarvis at 10:07 AM