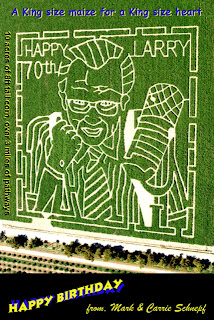 There's not a lot that McNeil doesn't remember, but he doesn't remember Larry King's old newspaper column, to which I have alluded here a few times. It appeared in USA Today a long time ago. Back in the olden times, when Mr. Ward and I used to work in the same building, he would read portions of it out loud for laughs. But in this day of people who do not even remember Mr. Spock, for example, it occurs to me that I should explain the allusion. Larry King's old column went something like this: "Elvis Presley was a fine young singer... If there's anything wrong with Yul Brynner, I'd like someone to tell me what it is... You know what's great for children's parties? Balloons." The ellipses do not indicate that I have left something out. They were part of Larry King's style. While I am imitating rather than quoting, I assure you that I am not exaggerating. Let me nose around on the "internet" and see if I can find an actual example to "link" to. Well, sorry, folks, but I've been looking for way too long now and it appears that every trace of the actual column has been scoured clean from the "internet," though I did find this corroborative "spoof," and even better, a 10-acre corn maze in the shape of Larry King, which I present here for your pleasure.
Posted by Jack Pendarvis at 11:46 AM