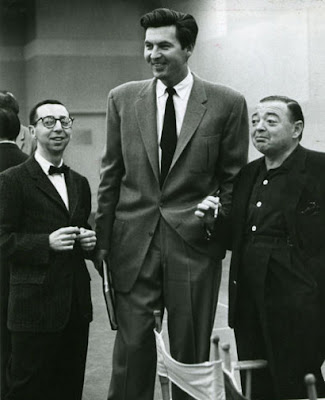 A dispiriting phone conversation with Dr. "M."! She claims that it is not fun to look at the same picture of Arnold Stang, Fess Parker, and Peter Lorre every day! This runs counter to the trim new purpose of the "blog": to be your reliable "online" source for three things and three things only: sorghum, Mr. Spock playing his guitar, and Arnold Stang (not to be confused with "Stang," the great new nickname for money which all the kids have begun to use in their daily lives as arbiters of the popular culture of the streets, sidewalks, and upper-crust salons). We take this streamlined approach (sorghum, Spock & Stang) after considering the follies of the past, in which we tried to define the purpose of the "blog." "Click" here for one example from over a year ago, at which you may laugh for its callow pretentiousness. "Part of the fun of the 'blog," said Dr. "M.," "is checking to see what picture will be on it. It's like an advent calendar." The conversation then took a cheerier turn, as Dr. "M." and I discussed the possibility of a "blog" advent calendar, beginning on Dec. 1. Keep your eyes peeled! But worst of all, Dr. "M." referred to Arnold Stang only as "that guy," anecdotal evidence that our attempt to spread "Stang consciousness" has failed a little. "Hey, but didn't you like the one of Mr. Spock playing his guitar?" I asked. "At first," said Dr. "M." "What about the one of a tractor harvesting sorghum?" I asked. "I like that one," said Dr. "M.," her tone suggesting that it is fine as long as I don't run it into the ground. "But don't you find the repetition of the Stang image to be Warholian?" I suggested. As I recall, there was no comment from Dr. "M." It is true that McNeil has called the repetition of the Stang/Parker/Lorre photo "disorienting." I was inclined to attribute such confusion to his well known medical problems. But now, with Dr. "M." corroborating, given her prickly past relationship with McNeil and their unwavering solidarity on this issue, I am forced to admit that maybe what is great fun for me ("posting" the same photo of Arnold Stang as often as possible with, perhaps, some inkling of its capabilities as a vessel of annoyance) may not translate into actual fun in the world where we live as human people.
Posted by Jack Pendarvis at 10:08 AM