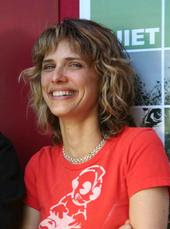 Wow! Our next batch of participants in the big survey are a talkative bunch. Good! First, noted film director Lynn Shelton (pictured) writes, "Are you kidding me? How on earth can someone have ONE favorite movie?!?! But if you're gonna FORCE me to come up with something...I just shifted my flixster movies around on facebook yesterday. [We have no idea what this means, either - ed.] For a couple of weeks the movie I had teetering at the top of the heap was 'My Name Is Ivan' (Andrei Tarkovsky); it is currently 'McCabe & Mrs. Miller' (Robert Altman). Take your pick." Well, Ms. Shelton, you know we will pick MCCABE & MRS. MILLER. Sometimes I think it is MY favorite movie, though I have had NIGHTMARE ALLEY listed here for so long that it is sort of carved in stone. Next up, the FBIL, who is partial to THE BRIDGE ON THE RIVER KWAI. Quote: "I first saw this at a friend's house when I was in the fifth grade. Before seeing it, I was a typical ten-year-old boy who loved to play with his G.I Joes. I saw this movie, and for the first time it dawned on me that war is not cool. It was also my first exposure to two of my all time 'faves,' William Holden and David Lean." The FBIL then detours into an aside on The Weenie Whirl... FINALLY! "Speaking of unique hot dogs," he writes, "remember Frankenstuffs? They were weenies with cheese or chili on the inside. While I can't attest to the quality of the Weenie Whirl, I can for the Frankenstuff... They were nasty, man." Last but not least, the acclaimed short story writer, essayist and editor Jim Ruland casts a vote for "DJANGO (1966). In an alternate universe, Sergio Corbucci is king of the Spaghetti Western and Sergio Leone is the quirky hack who put washed up American actors in his films. Corbucci's Django has the best opening sequence in the Western genre." We haven't seen it, but we trust you, Jim!
Posted by Jack Pendarvis at 12:27 PM