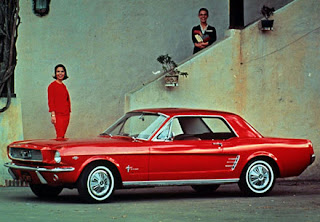 As I requested, the future brother-in-law has put the full force of his regular feature, the "Annotation Korner," into proving our great new nickname for money ("Stang") a wholly original invention, despite the claims of an ex-neighbor of sorts who says that he has been calling money "mustang" for "years." Here are the fruits of the FBIL's labors, and I quote: "The inherent problem with researching slang is the nature of slang itself: the same word can mean many different things to many different people. The wild card factor of the internet only complicates things even more. There are several 'slang dictionaries' online, most of which seem to be reader submitted, much like our much beloved Wikipedia, only lacking the 'truthiness.' That being said, I tried my best on short notice. In all fairness, this is a project that could take years. There were many different definitions for both Mustang and Stang, many of which are not suitable for the 'blog' (or anywhere else for that matter), but I was unable to find any reference to the word mustang as slang for cash. The video store guy evidently has not visited any of the slang dictionaries, or, if he has, he hasn't bothered to submit his definition. The most similar one I was able to find was 'prospective goods to be stolen' from the New Partridge Dictionary of Slang and Unconventional English. Among the many common slang uses for mustang was a verb meaning 'to be incredibly lazy, and a noun meaning 'leftover beer from a party that reappears at another function. Usually the least desirable and never more than one of each brand' (my personal favorite). (Both definitions from urbandictionary.com.) The most common slang usage of the word mustang comes form the military, where a mustang is someone who has risen from the enlisted ranks to become an officer. This definition was even listed in Webster's. As an example I give you, 'Although we do not know his actual fate, due to his suicidal tendencies and overall cartooniness it is highly unlikely that Popeye's pal, Shorty (voiced by you-know-who), became a mustang.'" Thank you, FBIL! And we would like to repeat that OUR "Stang" is named for beloved character actor Arnold Stang (whose picture we will not be "posting" for awhile, though this would be a nice place for it. We opt here for a Ford Mustang instead). Arnold Stang is better than any mustang, and no one can take that away from us. Everyone: Start calling money "Stang"!
Posted by Jack Pendarvis at 8:08 AM