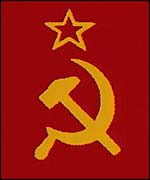 We interrupt Dr. "M.'s" TV Korner to present this special edition by way of the old Soviet Union. Now that the pressures of churning out MGMIEET are behind McNeil, he spends his time gingerly leafing through back issues of Pravda. His most recent finding is Pravda's review of a Bob Hope TV special. Here's a representative snippet: "Now, by a directive from Washington, a television burlesque brought together the elderly clown Bob Hope... singer-businessman Frank Sinatra... and grey-haired notables from Capitol Hill. As Marx noted... the feeling of shame is the most revolutionary feeling. Is it not for that reason that shamelessness has now become a distinctive feature of rabid reactionaries...?" Between the ellipses there was some pretty rough stuff about Bob and Frank, too rough for the "blog's" tender hands. It is apparent that the Soviet Union shared "Blog" Buddy Whorton's opinion about Bob Hope's politics. As for McNeil, the show sounded great to him. We searched for a "link" to the entire article, but McNeil sent it by way of some special library feature, so you'll have to take our word about the rest.
Posted by Jack Pendarvis at 1:01 PM