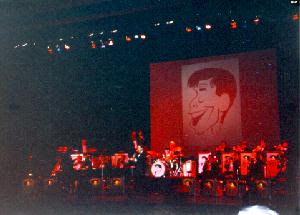 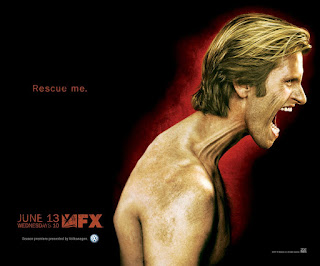 Talked to Mr. Ward on the telephone today. He said he had seen a lot of doctored pictures of Dennis Leary lately, promo bits for Mr. Leary's TV show RESCUE ME [One of Sheri Joseph's "faves" - ed.], in which Mr. Leary is shown with his jaw grotesquely distended. "I kept wondering what it reminded me of," reported Mr. Ward. "Finally I realized it was the logo for the Jerry Lewis Cinemas. Remember those?" "No," I replied. "They were all over New Jersey when I was growing up," said Mr. Ward. "They went out of business because he only showed G-rated movies. We'd be like, 'What's playing at the Jerry Lewis Cinema? Oh, 101 Dalmatians, which came out 12 years ago.' I haven't been able to find the logo, but I think it looked just like that picture of Dennis Leary." I sadly admitted to Mr. Ward that the Jerry Lewis Cinemas had never made it to Alabama. We were both near our computers, and thanks to the "internet," I was able to find a picture of the logo and show it to Mr. Ward long-distance. "That doesn't look like I remember it at all," said Mr. Ward. Ah, memory! Speaking of which, I have misremembered and badly reported a story that Mr. Ward told me: it wasn't Andy Warhol who noticed Mr. Ward's tiepin! It was Tom Wolfe. And it wasn't even a tiepin. Mr. Ward cleared up the matter for me. "I was an usher at the Metropolitan Museum of Art, for their lecture series," he said. "One day I was wearing my stupid skinny New Wave tie and holding it in place with a paperclip. I escorted Tom Wolfe to his seat. He was in his dapper little white suit. He looked at my paperclip and said, 'Oh, your sartorial choices are very eclectic.'" Mr. Ward repeated this latter phrase in an imitation of Mr. Wolfe's voice, which, in Mr. Ward's interpretation, fairly dripped with genteel scorn. This places it between the sincerity and joie de vivre with which Sammy Davis, Jr., received the pants of Barry B.'s friend [See the penultimate "link" in this "post" - ed.] and the open shock displayed by Tony Bennett when he saw my brother's sneakers. 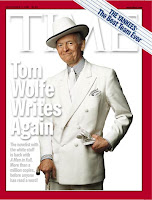 Posted by Jack Pendarvis at 3:14 PM