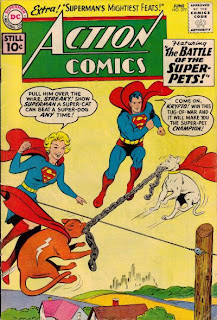 I have not had much to say lately. That's never stopped me before! Ha ha! Wheeeeee! We're having fun now, joshing and such! But in the past few "posts" I've let music do the talking for me, be it a marching (stationary for the moment) band playing a rendition of the Britney Spears hit "Toxic" or some guy pounding out some Sousa on his organ. I had nothing of substance to tell you, but I didn't want to leave you high and dry! My alternate idea was to make a "post" with a title like "Uxhoihdaoifh Uhoaidfh Yhadofih" and a textual body, complete with "links," which was going to look like this: Ikdflakdhfadkfjahdkfjh? Hlkjdkfh "oifjskfj" sjhdfkjh! Skjdflkdhlfkdh "ldkh" df "dlkfhlsdkh" ldkflkd! But then I thought about how nosy "the man" has been lately and was afraid it would be mistaken for a secret code and the "blog" and myself would mysteriously vanish. My hilarious "gibberish" "post" would have been illustrated by a picture of Mr. Mxyzptlk, the rascally imp who used to bedevil Superman! [Note: Pendarvis was unable to find a "satisfactory" picture of Mr. Mxyzptlk. Because Verdell becomes distraught if there is no illustration, he settled on a depiction of the superdog engaging in a "tug o' war" with the supercat. - ed.] I still have nothing to say. But the NBIL did send me some information about tyromancy, which is when you put out a few pieces of cheese and predict the future by seeing which piece your rat eats first.
Posted by Jack Pendarvis at 5:54 PM