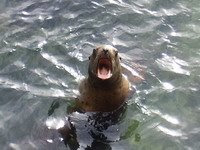 James Whorton, Jr., wrote in response to a recent "post": "No kidding, in the latest draft of my novel I had a character talking about clouds that communicate information to people. They were called the 'passenger clouds.' ... Something like it also appears in a Nabokov story... I can't remember the title now." Whorton was writing from a hotel room in which there was a problem with the hot water: not a lack of it, but a surfeit. "The water was steaming even in the toilet," Whorton reported. That is a good detail, and I hope he was not planning to use it in an upcoming novel, because now I have blown it. I used to be more sensitive about such things. But the "blog" is a greedy beast and requires a constant influx of tidbits. Speaking of t*****s (I cannot bring myself to type the word again! [Not "tidbits" - the other word!] It is not the sort of thing we usually discuss on the "blog." Henceforth I will refer euphemistically to the receptacle in question as "the plumbing"), I was looking at "the plumbing" the other day and noticed for the first time that its brand name is "Glacier Bay." But in my hasty glance, I saw it as "Glacier Boy." It struck me that "Glacier Bay" is a pleasant and comforting way to think of "the plumbing." It also struck me that "Glacier Boy" would be a great superhero, known for his powers of extreme slowness and deliberation. (Pictured, a friendly creature from the Glacier Bay National Park & Preserve.)
Posted by Jack Pendarvis at 12:46 PM