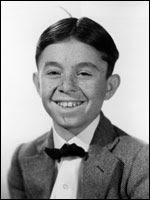 Let's see what's happening in the world of entertainment! I just enjoyed a William Faulkner reference on an old rerun of THE SIMPSONS. Moe claims that Faulkner wrote gags for the Little Rascals. I've seen the episode many times, but this evening noticed for the first time a Simpsons-style William Faulkner lurking in the background of the Little Rascals flashback. In other entertainment news, McNeil's coworker Secondhand George says that he used to see Foster Brooks hanging around in Winston-Salem, North Carolina, where his (Brooks's) daughter lived. Old SG spoke to Foster Brooks once. Mr. Brooks was sitting at a lunch counter with a sandwich and a cup of coffee. SG introduced himself and Mr. Brooks was "very nice and polite." He abruptly shifted into his famous "drunkard" character for SG's personal entertainment. This has been All-Star Entertainment Wrap-Up. (Pictured, Carl "Alfalfa" Switzer, one of the Little Rascals.)
Posted by Jack Pendarvis at 4:14 PM