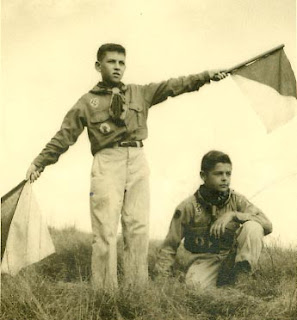 McNeil! What am I going to do with him? Yesterday, during a telephone call, he revealed something unexpected and distressing: He does not watch the "blog's" "youtube" clips IF they involve homemade things such as this fellow doing his Michael Caine impression or this talented young woman performing the opening number from the Music Man in her own home! To me, these represent the fulsome, egalitarian spirit of the "youtube." Yet at any sign of actual non-celebrity humans or so-called "unprofessional" production "values," McNeil immediately suspends the operation of his "youtube." McNeil prefers his own slick brand of MGMIEETs, and indeed submitted two samples today: THIS and THAT. Nothing against them! SPOILER ALERT! One contains Bob Hope, Don Rickles, John Wayne, and Bing Crosby while the other features Sammy Davis, Jr., and Batman. Fine! I can enjoy that. But why can't McNeil, in turn, appreciate the two young British gentlemen who try their best at a Laurel and Hardy number or some guys who take their bassoons into an elevator? That is all I ask! (Pictured, semaphore flags, which seem appropriate to the title of our "post.") P.S. Remember the time McNeil sent us some footage of an average joe enjoying a rainbow? Perhaps McNeil is more a "man of the people" than he seems! Perhaps!
Posted by Jack Pendarvis at 8:20 AM