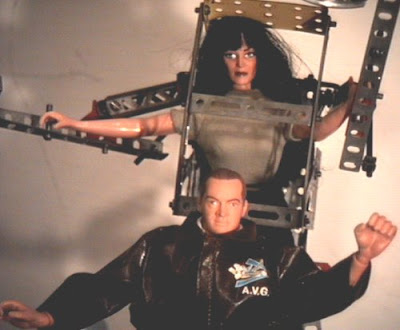 McNeil sent me a "link" I don't exactly understand and neither does McNeil, probably. I'm not sure the guy who MADE the "link" understands it. But he has produced a creative effort! In the "link's" own words, the "link" is about a "1:6 version of Bob Hope... traveling the world as he is hosted by GI Joe collectors around the globe. This page details Bob's stay with ScottE (aka HoloSuite) for an October 1999 week in Vermont." Well, most of that seems clear, I guess. There's a GI Joe version of Bob Hope and someone mailed him around the country for photo ops in the 90s. That's my interpretation. Anyway, here's the "link." I believe the name "Joined Again" (see the "link") is supposed to be a pun based on John Glenn. Is that it? I don't get it. It's my own fault! My head hurts. Why do I have a "blog"?
Posted by Jack Pendarvis at 5:27 PM