I Am Not An Anatomist 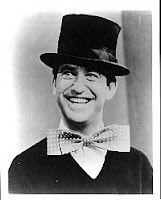 This morning I was walking past the Ford Center here in Oxford, MS, when it struck me for the first time that the presidential candidates were set to have their first debate on the very stage where George Saunders and I had OUR first debate! To be accurate, George Saunders and I did not have a debate. It was like, "You are nice." "Thank you." "How pleasant to see you." "And you as well." It was a reading. I read then he read and there was very little fighting. Well, when I got home this afternoon, the future of the upcoming debate between You Know Who and Old What's His Name had been thrown into doubt! You can imagine how distressed I was about my loss of "braggin' rights." But not everything is terrible! For example, both Jon Stewart and David Letterman did Jerry Lewis voices on their late night shows this evening. Mr. Stewart pretended to injure his shoulder and said something like, "I hurt my LOYD-anum," in the famed Jerry manner. I am paraphrasing. The final word was a Jerry-like word that I cannot recall with certainty and I wouldn't be surprised if it did not represent an actual part of the shoulder. I am not an anatomist! Then I "flipped over" to find Mr. Letterman pronouncing the surname "Spitzer" with a Jerry-like twist. See? Jerry is relevant, just like I keep insisting all the time into the uncaring void. Finally I will mention that Stephen Colbert ended his program this evening with a Soupy Sales reference. Am I quite as excited as I would be had he chosen Jerry Lewis? Perhaps not. But it was a nice try. P.S. When I was looking for something to "link" with the word "presidential" (above) I noticed with surprise that in a previous edition of Mr. Ward's Presidential Korner, someone has placed a pencil on Kennedy's podium, despite direct orders to the contrary! Check it out. P.P.S. Perversely, I have chosen an image of Soupy Sales with which to illustrate this "post."
Posted by Jack Pendarvis at 9:37 PM