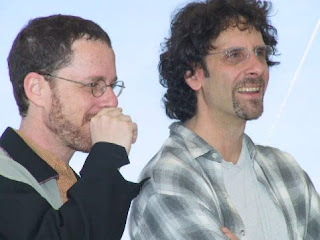 As much as I loved Manohla Dargis's kind mention of Jerry Lewis in the New York Times yesterday, I feel I should be completely honest and say that it was used in the service of an argument with which I do not agree. I have seen a lot of reviews of Coen Brothers films that seem to imply that the brothers are cold, inhuman automatons getting by on equal parts slick, robotic skill and misanthropy. These reviews tend to mention (as Dargis's does) that their movies nevertheless often have warm human hearts at their centers. This, the reviewers claim unfailingly, is an accident, as if Jeff Bridges (for example) improvised his dialogue in THE BIG LEBOWSKI and directed himself (after casting himself and creating his own character)... as if, in other words, the Coen Brothers are occasionally thwarted in their evil attempts to make coldhearted, mean old entertainment by the gracious and subversive efforts of a kindly band of underground vigilante actors who secretly insert humanity while the Coen Brothers' backs are turned or something. And then Jeff Bridges (for example) sneaks in late at night and edits the movie so that when the Coen Brothers see it for the first time, they're like, "What? I don't remember putting that humanity in there!" I just don't buy it, I suppose. I haven't seen the movie currently under review. I'm just saying! I hope this will not discourage Manohla Dargis from continuing to slip Jerry Lewis references into everything, just the way I like it!
Posted by Jack Pendarvis at 1:42 PM