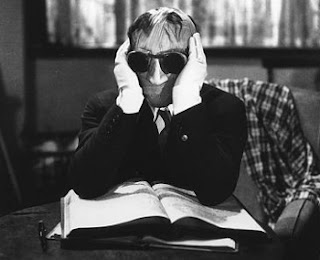 "D." from Atlanta sends in a handy "link" for assuaging McNeil's fears about the particle collider - or "black hole machine" as we've been calling it on the "blog." It's a place to go to see whether "the large hadron collider" has "destroyed the world yet." Here it is: http://hasthelargehadroncolliderdestroyedtheworldyet.com/. But "D." has no way of knowing that McNeil has moved on. McNeil is now more frightened of "invisible soldiers." Writes McNeil, "Did you see Larry King? With Bob Woodward? What was he talking about when he was talking about the 'secret weapon' aspect of the surge? I was all like [here McNeil uses a clever, saucy, youthful and profane three-letter acronym expressing confusion or wonderment]. Are they making troops invisible?" McNeil raves on. "I've been hearing about that for about a year now - where they have the capability to project what's behind a person in front of them so you can't see them." Get some rest, McNeil! Everything is going to be fine.
Posted by Jack Pendarvis at 5:07 PM